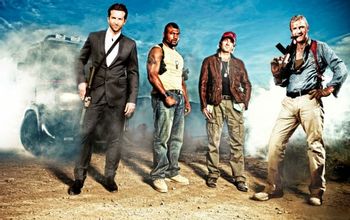 The film adaptation of The A-Team series, written and directed by Joe Carnahan and released in 2010.

The film follows the Ragtag Bunch of Misfits from their roots when they come together pulling off a mission against a drug lord in Mexico. They become a legendary "crack commando team" running operations that regular military teams can't do. Col. John "Hannibal" Smith (Liam Neeson) is the leader, the Man with the Plan. Lt. Templeton "Face" Peck (Bradley Cooper) is the charmer, point man and has been with Hannibal longer than the rest. Cpl. Bosco "B.A." Baracus (Quinton Jackson) is the machine savvy bruiser of the team. And Capt. H.M. "Howling Mad" Murdock (Sharlto Copley) is their (possibly insane) Ace Pilot.

Eight years and "80 successful missions" later, a complicated series of events put them in a very delicate operation to recover U.S. minting plates and several million dollars printed by them. Upon a successful completion, their commanding officer General Morrison (Gerald McRaney) is killed by a car bomb and the plates stolen, along with the money being torched.

Because of how classified the mission was, Morrison was the only one who could verify their story and they effectively look like bank robbers and conspirators with a rival mercenary group. They are charged with war crimes, stripped of their rank and sent to prison. But even that isn't enough to stop them, as six months later they break out of prison with the help of a CIA operative and set out to clear their name. This involves tracking down the location of the plates, the PMC leader who framed them, plenty of collateral damage, and the A-Team Montage.