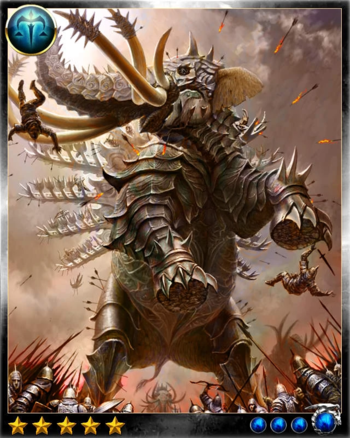 "The bray is no trumpet, the pound is not drums, the siege engine that walks."
"Imagine you're a provincial Roman farmer. The most you've seen of the world is maybe the length of Italy if you're really well-traveled. Now imagine that through the sleets and the mist you see a great grey lumbering bulk begin to emerge. Imagine you see this creature two-and-a-half times as tall as you, at least a chariot-length long, with glistening white tusks and a distended snout, its eerie trumpeting carrying across to you faintly on the wind. This is probably the closest that human beings ever got to legit fighting monsters — fighting something so alien and gargantuan that there was no frame of reference for them."
— Extra Credits describing the Battle of the Trebia

in the second part of their series on the Punic Wars

If you want to make an army look exotic and threatening, give them War Elephants.

Trained war elephants have been used by some historical nations, but fairly sporadically and usually by ones fighting against the Roman, European or Chinese cultures that most modern writers are descended from. Thus, war elephants' presence in an army easily establishes it as foreign and unusual. Elephants also have a domineering presence on the battlefield, smashing apart shieldwalls and light fortifications and trampling over regular troops, and their sheer fearsome bulk presents them as an obvious threat that will be very difficult to deal with. These creatures are typically be used by the Evil Army or The Horde, but if they're on the heroes' side then they might be used by foreign allies to indicate the army's exoticness.

In battle, elephants are mostly used for their fear factor, intimidating enemy troops while rallying yours, and as breakthrough troops with which to smash through enemy lines. It's also common for howdahs to be mounted on their backs, typically carrying additional soldiers, ranged troops to take advantage of the raised vantage point, or even whole cannons. More pragmatically, the beasts can also be used to haul around siege weaponry, supplies or mobile fortifications. The main downside to these creatures is the possibility of them stampeding if something scares them, at which point they'll usually trample their way through friend and foe alike; indeed, a common strategy employed by armies facing war elephants is to try to get them to stampede before battle is joined, ideally in the enemy's own camp.

War Mammoths work too, especially when used by armies coming from the endless cold of the northlands or in the distant past. Fantasy elephant equivalents can also serve this purpose, in order to further emphasize the exoticness of the army or world in question. In these cases, the elephants' size tends to be super-sized to the point where they almost qualify as war-barges with tusks. They may also be accompanied by other large animals like rhinos or, if the writer is more fantastically inclined, even dinosaurs.

This trope is Truth in Television: kingdoms in North Africa, the Middle East, and southeastern Asia have weaponized pachyderms at various points in history. Elephants are huge, strong, tough, terrifying, and highly trainable animals capable of carrying multiple riders on their backs, whether they be officers wanting a better view of the battlefield, archers, or even artillerymen firing a ballista or cannon from a howdah. Horses were also generally terrified of them and wouldn't go near them, so a few elephants in front of your army could make enemy cavalry charges useless. However, they could easily panic in battle, trampling friend or foe, and their sensitive hearing made them even more prone to panic when loud firearms became widespread.

Subtrope of Beast of Battle. Compare Horse of a Different Color. See Cruel Elephant for violent and dangerous elephants in general.