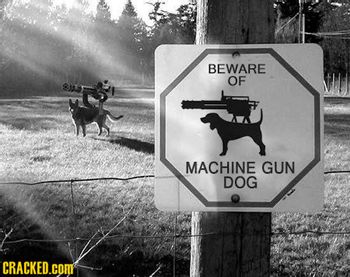 And if you think that's scary,
you should see the Schnauwitzer.
"Mr. Powers, you'll notice that all the sharks have laser beams attached to their heads."
— Dr. Evil, Austin Powers: International Man of Mystery
Advertisement:

A Sub-Trope of Attack Animal and Beast of Battle. What could be more dangerous than an animal, wild or not? Mounting weapons on it. Or simply explosives, to add animal cruelty to injury.

See also Weaponized Car. We've also got a Useful Notes page for animals in the military. Wikipedia has a category for this.

For animals used as weapons, see Baa-Bomb, Grievous Harm with a Body, Living Weapon, Shamu Fu, and Abnormal Ammo. For weapons they already have without outside interference see Natural Weapon. Not related to Weaponized Offspring.