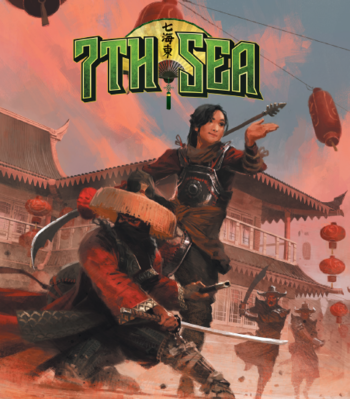 Do not ask "Why do we fight?" Instead ask, "What do we fight for?"
Advertisement:

Welcome to Khitai, where the world calls, and you must answer.

In 2016, John Wick Presents launched a Kickstarter for 7th Sea: Second Edition. After that Kickstarter broke the record for most money raised on a Tabletop RPG ($1.31 Million at the time), one of the final stretch goals of the campaign was to create an entirely separate game line to focus on Asian-analogue nations, rather than a single sourcebook. And so, 7th Sea: The East was created.

While mechanically similar to 7th Sea: Second Edition (the official 7th Sea podcast states that the designers intend for the games to be cross-compatible; thus, you can make a Khitai hero using Thean rules and a Thean Hero using Khitai rules), the themes of The East are remarkably different. Thean Heroes are meant to level up by changing the world in some way — by getting revenge on a Villain or winning the heart of their one true love. Khitai Heroes level up by reacting toward a Destiny the world has in mind for them. Whether they fight to fulfill that Destiny or escape it is integral to the system.

Another major change comes in the form of the base traits of the characters. Second Edition has standard RPG stats like Brawn, Wits, or Panache. Khitai characters choose from stats like Compassion, Honesty, Joy, Loyalty, Peace, Respect, and Wisdom. These stats are associated with the hero's motivation behind their actions, rather than their physical capabilities to carry out these actions.

The Kickstarter for The East ended on November 12th, 2017. The Quickstart rules can be found here

The countries of 7th Sea: Khitai include:

Khazaria (Remnants of the Mongol Empire

The Kiwa Islands (Maori and Polynesians

The Secret Societies of 7th Sea: Khitai include:

The rest of the game world of 7th Sea: Khitai provides examples of: