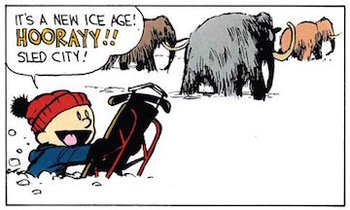 Herds of mammoths appearing out of nowhere are one of the lesser-known side effects of prolonged cold spells.
Advertisement:

After the dinosaurs, woolly mammoths are some of the most well-known prehistoric creatures. Unlike the dinosaurs, which have become associated in the popular imagination with the steaming jungles and volcanoes of prehistory, mammoths are usually thought of as inhabiting cold, snowy lands. This is largely because the most well-known species, the woolly mammoth, lived alongside early mankind in northern Eurasia and North America during the last major Ice Age. Being physically impressive and memorable specimens of the Ice Age megafauna, and some of the first to be scientifically described, they eventually became a symbol of the Ice Age itself, and through that of the cold and rigors associated with it and the (by modern perceptions) uncivilized and barbarous state in which Ice Age humans lived.

When these shaggy elephants appear in modern fiction, they almost always do so in conditions of intense cold: outside of settings that try to hew to more realistic interpretations of these animals, you will not find mammoths living in warm or temperate lands nor near civilization. Often, they are even shown inhabiting near-Arctic conditions rather than the grassy tundra they lived in in real life. Instead, the appearance of shaggy elephants striding through knee-deep snowdrifts is often used as a shorthand of sorts to communicate that a land or period is terribly, terribly cold, and often not suited for civilization.

In general, there are three common ways in which this trope is employed:

Since Tropes Are Flexible, this can be extended to other shaggy elephantine mammals such as mastodons and fictional mammoth- and mastodon-like creatures, as long as their presence is used to symbolize cold and/or ice ages. Other hairy Ice Age megafauna, such as woolly rhinos, are sometimes used to similar effect, although this is far less common.

In real life, most mammoths did not live in particularly cold conditions and did not have thick coats (the only two that did were the woolly mammoth and its ancestral species, the steppe mammoth), and were very similar to modern elephants in most respects. Some of the most notable include the Columbian mammoth and the African mammoth. However, they are not as famous as their woolly cousins (since specimens can't be found preserved in icenote Though all woolly mammoth specimens found "in ice" were actually mummified in frozen peat and the like whenever the soil allowed it, mammoth remains with more than bones are never found "perfectly preserved as if they were still alive in solid blocks of ice"), and so they never really show up in fiction. Granted, of all these species, the Columbian mammoth, Mammuthus columbi, has achieved some popularity thanks to its widespread distribution on America. And also because it was even bigger than the woolly mammoth.

As a last bit of trivia: the real-life woolly mammoths, and the mammoth genus by extension, went extinct on Wrangel Island four millennia ago, way after the end of the last glacial period (twelve millennia ago) and five centuries after the completion of the Great Pyramid of Giza (just in case you need more proof of how ancient the structure is).

The boss of Frostbite Caves, a robot mammoth that attacks with ice.

The boss of Frostbite Caves, a robot mammoth that attacks with ice.