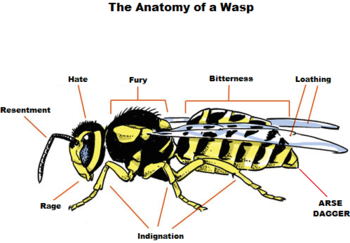 "Here's how it works with wasps. We eat our prey alive, and when we don't, we lay our eggs in their eyeballs so our young can feast on their brains when they hatch!... When you're born that big an asshole, the least you can do is have a little empathy."
— Wasp Rick, Rick and Morty
Advertisement:

While bees have long been viewed as a friend to humanity, people have not, historically, had many reasons to like wasps. They don't make honey or (most of them) pollinate flowers, are far more aggressive, and can sting as many times as they like. They're also highly territorial and easily roused, even by mistake, in defense of their nests, and pester humans for anything remotely sugary they're carrying. People have therefore learned to associate them with angry swarms and impending pain.

As a result, wasps have developed strongly negative reputations in popular culture. Non-sapient wasps will be vicious, aggressive animals or roving swarms of droning pain; sapient wasps run the gamut from simple bullies to ferocious raiders and barbarians preying upon their fellow insects — or, if large enough, preying upon people. Wasp-themed characters, whether they simply use wasp imagery or are associated with actual wasps, are rarely pleasant people either.

While wasps are the most common suspect, their cousins, the hornets, are just as guilty. Hornets are much larger and their sting is far more venomous, with the biggest of them being able to kill even larger animals and attacking other animals as a colony for food. Don't be surprised if a work dumps them in the same boat as wasps, as chances are that said work did its homework.

When female, which is quite common given that most eusocial wasps and hornets function the same way eusocial bees and ants do, they embody the Dark Feminine of the Light Feminine and Dark Feminine spectrum, especially when compared to gentler bees.

Often found in the Hornet Hole. See also Unpleasant Animal Counterpart and Animal Jingoism for when villainous wasps and hornets are matched with Virtuous Bees or ants, and Scary Stinging Swarm for when any of these insects go out in force to sting and harass their victims. Compare Bee Afraid for when it's bees who receive the unpleasant insect treatment, and Ant Assault.

Not to be confused with the other wasp, the New England White Anglo-Saxon Protestant.

This is not a list of all wasps/hornets in fiction. This refers specifically to them being portrayed as more monstrous than they are in Real Life and/or defined by their monstrosity.