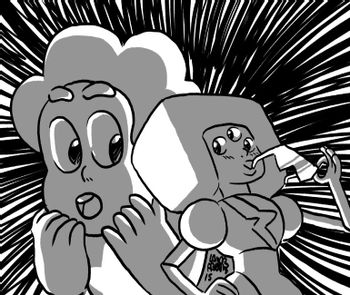 The episode begins with Steven in his room, having a pretend conference with his toys. He imagines and reacts to their make believe dismay at his having declared himself "a big boy now" and too old for the toys (and too old to call himself a "big boy"). He packs them away in a box, pausing only to consider whether his Master of Ceremonies Bear Bear should also get trashed. He decides in the end that the bear can stay, and starts down the stairs with his box. He unfortunately can't see, because of the box, that there's a ball on the stairs. He steps on it and goes flying, losing his grip on the box.

But he lands safely because Garnet just happens to be standing her very tall self right at the terminus of Steven's fall. Steven expresses gratitude at how lucky it was she was there. Garnet says luck had nothing to do with it. Curious, Steven asks her to explain. She declines to explain, saying that she doesn't think he can handle knowing it yet. Steven insists he's a.... large man and ready to know. So Garnet relents and explains to him that, after a fashion, she can see the future.

The two do their morning exercises on the beach, after which Steven decides to have breakfast. Still curious about her power, Steven asks Garnet what sort of options he has for breakfast. She tells him since they're already outside, he'll likely go to the Big Donut. This turns out to be Steven's decision, but once they get there Garnet explains her power a bit more thoroughly. She doesn't see the future precisely.

Garnet: No one can see the future. I see options and trajectories. Time is like a river, that splits into creeks, or pools into lakes, or careens down waterfalls. I have the map, and I steer the ship.

At the door, though, he asks what will happen if he says hi to Sadie. Patiently Garnet tells Steven she'll probably say "hi" back. Steven asks what the possibilities are for greeting Lars. Garnet tells him that there's a single possibility Lars will high five Steven — but at least two possibilities that result in Steven getting third degree burns over most of his body! Oblivious to the worse possibilities, Steven proceeds to say hi to Lars anyway. Lars, startled, loses his grip on his extremely hot carafe of coffee. Garnet simply steps in front of Steven and gets splashed by the boiling liquid.

Advertisement:
Lars: Criminy! Are you okay? That coffee was really hot.
Garnet: I drink coffee for breakfast!

Shaken by his experience, Steven and Garnet go to Fryman's. Steven asks Garnet about possible outcomes here. She describes them one by one: he could choke to death on one of his fry bits. He could not look where he's going while eating the fry bits and fall into a sewer. He could get food poisoning. Or attacked by wasps. Now properly freaked out, Steven begins imagining his own lethal misfortunes: a shark attack, being squished by the big doughnut from the shop, and Cookie Cat returning in his spaceship to fry Steven with a laser.

By the time they return home, Steven is pretty much a nervous wreck. He's gone and found a helmet and put it on, and is trying to work up the nerve to pick up a dull plastic knife to spread mayo on his sandwich. Unable to convince himself that he can wield the knife safely he turns the mayo jar upside down and dumps the whole jar on his sandwich and the counter. Amethyst and Pearl arrive, ready for a mission. Steven, near tears, begs Garnet not to leave him because the future and not knowing it is terrifying to him. Garnet tells Steven that he's in control, and all she will tell him about the future is to not go on the roof.

As a humdinger of a thunderstorm begins, Steven's nerves get on edge as the front door is blown open. His mind conjures more images of him dying horribly. He bursts into tears and hugs his MC Bear Bear. Steven begins to wonder what Garnet saw happening to him in the future if he gets on the roof. He recalls himself saying he's a big boy now, and that he's a Crystal Gem. This helps Steven get a hold of himself. He goes out on the roof in the pouring rain, and stands there. The Gems come home, and Garnet comes outside to see him on the roof. Steven tells her that his life is terrible now that he knows there are possible futures, and that the more he knows, the more he knows he doesn't know.

Garnet attempts to explain her reasoning for telling Steven not to go on the roof. She thought he might understand not to go up there, and they would be closer.

Garnet: I see so many things that can hurt you. I should never have let one of them be me.

Steven slides down off the roof, runs to Garnet and gives her a hug. Despite the weirdness between them, they are closer than ever. As Garnet hugs Steven with one arm, there's a thunderclap. Garnet lifts one hand and takes the lighting strike on her palm gem.