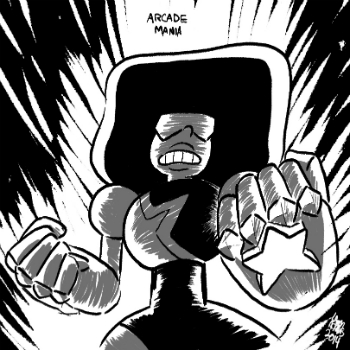 The Crystal Gems are on a mission in an icy cavern. After Steven slips and Garnet catches him, a gem creature appears. It fires drills that fly around independently, and although Garnet easily dispatches the main creature, the drills burrow away. Garnet doesn't see them as much of a problem, so declares the mission over.

In celebration of a successful mission, Steven takes everyone to Funland Arcade—his treat! Pearl hates her game because it's about crashing into everything while Amethyst immediately starts cheating at the skeeball track. Garnet destroys the first two games Steven shows her, but gets incredibly caught up in a rhythm game called Meat Beat Mania. Steven sees Mr. Smiley looking for the person who broke his machines, and hurriedly rushes off with Pearl and Amethyst, telling Garnet they'll meet her at home.

By the next morning, Garnet still hasn't come home, but Pearl assumes she just went on a solo mission. Steven goes off to comb the beach with his metal detector, but is attacked by the drill creatures. Amethyst and Pearl show up to fight them, but can't manage to hit them, and declare they need Garnet's insight. Steven realizes Garnet is still at the arcade and runs off alone after her.

Steven finds Garnet at Funland Arcade, exactly where they left her. His attempts to get her attention fail to do anything but remove her visor, revealing her three eyes fixed on the screen, her third eye flashing colors and moving with the rhythm of the game. Realizing the game has Garnet in a trance, Steven unplugs the arcade cabinet, but Garnet starts powering the machine herself. Steven tries to use the quarters he found on the beach to play the game and beat Garnet, but loses to her until he runs out. In desperation, Steven tears a part off the cabinet and uses it to destroy the screen. Garnet finally regains focus and tells him he won. She rushes off to help Pearl and Amethyst, and Steven tries to follow. He's stopped by Mr. Smiley, who saw that he destroyed Meat Beat Mania and assumes Steven destroyed the rest as well. Steven is forced to work at the arcade as compensation while watching the gems battle the drill monsters from the sidelines.

We Iris Out over Steven when he finds a quarter while sweeping the floors.