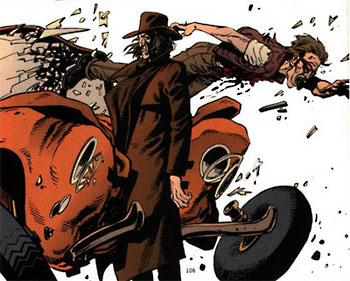 "Not enough car."
"Any sufficiently durable individual is indistinguishable from immortals."
— Anonymous
Advertisement:

The power of unambiguously superhuman durability, ranging from being "merely" Immune to Bullets, to getting hit by a nuke and finding it to tickle a bit, and even beyond that.

This is a Required Secondary Power to be able to do anything with Super Strength; without it, Newton's Third Law would result in you ruining your hand every time you threw a super-punch, and every bone and muscle would snap/tear under the tension of lifting a car. Of course, that doesn't mean characters with Super Strength are always shown having Super Toughness in any other context.

A Sub-Trope of Nigh-Invulnerability (specifically, the Made of Diamond type). Compare Made of Iron, where an explicitly non-superpowered character can take a lot more punishment than is normally possible for no apparent or explained reason, though Charles Atlas Superpower can blur the line between Made of Iron and Super Toughness.

This applies to a lot of superpowered powerhouses, Flying Brick-type characters, as well as many of those who utilize extensive cybernetic enhancement, Ki Manipulation, Supernatural Martial Arts, and/or Functional Magic. It's sometimes a side-effect of particularly adaptive Healing Factors. Most Super Soldiers possess it, and it can also be achieved with Mind over Matter.

Combine it with Super Strength, and you're likely to end up with the Implacable Man. Often part of Super Speed users as well as per Required Secondary Powers, as anyone with otherwise ordinary human physiology would literally tear themselves apart very quickly. When it's just their skeleton see Unbreakable Bones.

The limits of his durability are left vague. David himself believes he wouldn't be able to survive being shot point-blank, and given the quasi-realistic tone of the movie seeing him come out unharmed from something like that would feel a bit odd, but that's never tested, and nothing else is ever enough to hurt him.