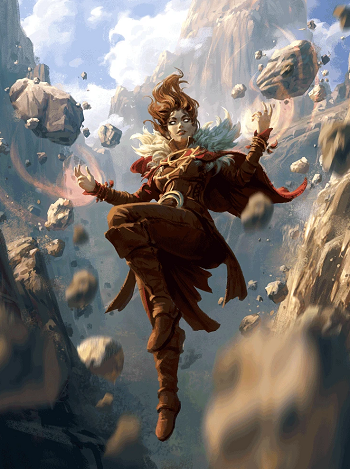 Gives new meaning to the term "Rock on".
"The key to Earthbending is your stance — you've gotta be steady and strong. Rock is a stubborn element. If you're going to move it, you've gotta be like a rock yourself."
— Toph Beifong, Avatar: The Last Airbender
Advertisement:

This Elemental Power Sub-Trope is about characters with power over earth. Despite being the least used of the classical elemental powers in protagonists ("earth" powers usually manifest as the more nurturing and proactive Green Thumb) there are many things one can do with Earth. Earth users may be able to cause earthquakes, rockslides or split the earth itself and crush their opponent between two slabs of crust or drop their opponent into a fissure; use sand, rock, or mud as an extension of their body to create tentacles or other objects, encase themselves in a rock shield to avoid attack and many other possibilities. A common variant of it is controlling sand and dust, i.e ground-up rock and soil.

Earth users can be down to earth, rock solid, unbending, and slow to act but with a lot of momentum once they finally get rolling, both figuratively and literally. If the Five-Man Band has elemental powers, earth usually goes to either The Big Guy or The Leader. In a Four-Temperament Ensemble that doesn't involve a Power Stereotype Flip, this character is likely to be Melancholic. Often found on the Boisterous Bruiser or other types of jolly and large Blood Knights or Proud Warrior Race Guys. If female, they may be motherly characters due to the extension of the "Earth Mother" archetype (Gaia of Greek myth fits the archetype and is an example of this trope). Sometimes the stock personality is inverted by making the character physically small or quiet and introverted instead of a big, loud, guy. Sometimes they will prefer to go barefoot, if skin contact with the soil increases their power or improves their control.

If they cannot create their element themselves and are restricted to use of rocks/sand/ground around then they may find a tactical advantage in the mountains or desert. This tends to be less of a problem than most who suffer this restriction as the vast majority of adventure stories take place on land. Bigger, heavier Earth users may have a fear of water or be explicitly unable to swim due to their bulk. Another fear of theirs may be flying due the Sky being considered the opposite of Earth. They may be severely disadvantaged in environments made of artificial materials like plastics if they are limited to manipulating unprocessed earthen materials.

Alternative Title(s): Rock Steady, He Will Rock You, Terrakinesis, Geokinesis