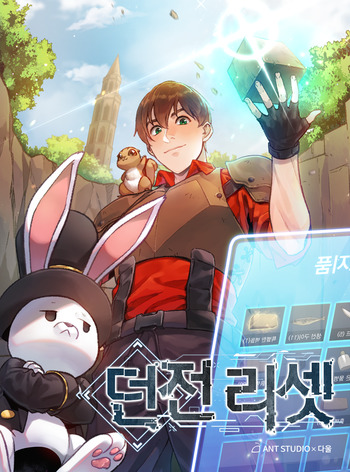 A webcomic illustrated by Studio ANT based on the Light Novel of the same name, Dungeon Reset follows the adventures of a Korean teenager who finds himself trapped in the first level a deadly video-game-esque dungeon filled with monsters, traps, magic, and a malevolent game master intent on killing him off.

Jeong Dawoon and 100 other average, modern-day folks were suddenly transported to a video game style "dungeon" by a cruel, rabbit-shaped Guide who orders them to play his game... or die. With each participant granted a super-powered Skill and a starting weapon, the unwitting players are forced to battle monsters, scavenge for supplies, and try to stay alive in an environment full of terrifying beasts and deadly traps. Their numbers quickly dwindle 'till only a handful are left. Even though Dawoon started the game with a tiny knife and a nearly useless Skill called "Purification," he manages to survive the hazards of Level 1 by sticking with a group led by the charismatic Ryu Seung-Woo. In fact, the amateur dungeoneers are within spitting distance of the Boss Fight when Dawoon falls victim to a hidden pit trap. His companions are forced to flee, leaving Dawoon behind to bleed out.

But as he lays dying, Dawoon's companions defeat the Level 1 Boss. All survivors of the dungeon gain rewards and move on to Level 2... but not Dawoon. Through some twist of fate Dawoon is granted the same boons as his teammates, but left behind in the dungeon while Seung-Woo's group progresses to the next stage. Even the snarky rabbit-shaped game master is confused, calling Dawoon a bug in the system — one he has no qualms about crushing. (Or leaving in a pit trap to starve to death.)

Now Dawoon has to figure out how to survive in the first level of a fatal video-game-esque world using only his wits, his "useless" Purification Skill, and the tools that can be found in a Level 1 dungeon.