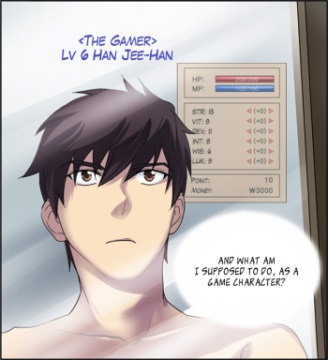 Heads-up, display.
Unseen Feminine Voice: -musical chime- Would you like to distribute abilities now? Yes/No
Harry: Um, Hagrid, what's that?
Hagrid: That's proof that yer a wizard, 'Arry. The Narrator. Ya see, life is like a game, no, no, life is a game, ya that's right and the wizards are the players. Now, don't go moving no points around til yeh know what yer doing, 'Arry.
— Harry Potter and the Munchkins
Advertisement:

You're living an otherwise normal life when weird things start happening. You find yourself hearing voices or seeing things you never were aware of before. You find yourself bound by strange rules and, when they come into conflict with what you had accepted as physical laws, it's often physics that break first. You're still in the same world and your friends and family are living out their lives. If you have a day job or a school schedule you may still have to show up, even if it means facing endless repetitions of what you remember. Congratulations, you're at the corner of a Game Mechanics Verse and a Broken Masquerade.

There's many ways your path can take and, even surrounded by familiar people, you might be forced to go alone.

Yes, you're in a subtrope of RPG Mechanics 'Verse. In most of those worlds and stories it's generally not surprising to the average denizen that physics works by die mechanics or that the tech/magic for Head's Up Displays and other forms of Augmented Reality and Stat-O-Vision exist, but this trope focuses on plots where 'reality' comes as a complete surprise to at least one character. It could be that they're seeing behind a Masquerade for the first time to the Character Sheet they've always had, or they're leaving behind their Muggle society for a more Genre Savvy one.

It could be an artificial intrusion of an apparently programmed interface that either acts as a barrier/overlay to the underlying reality or begins to rewrite it, such as a gameshow being enforced by Sufficiently Advanced Aliens or a pantheon's main god deciding one day to literally play with dice. It could be a freshly minted pocket universe populated by clones of 'real' people without their consent or a "Groundhog Day" Loop where the only way to break it is to play the game. The universe can even start acquiring updates/patches with or without an approachable system administrator.

While the main focus is on video games and the visual tricks they pull this is also open to statless board games and, in theory, there could easily be a character invaded by a pure Tabletop RPG. An intangible Dungeon Master could suddenly start 'following' someone around audibly narrating their actions and allowing them to ask for dice rolls that affect/overwrite causality.

Compare No Fourth Wall. Acts as a Game Changer. Often used as a framing device for a Fix Fic. Relative of Trapped in TV Land and The Game Come to Life. Sometimes appears in actual games as a form of Gameplay and Story Integration.

Situations where it might be a surprise to the audience that the world runs on video game logic, but not to the characters, better fit the supertrope. For systems where life is as hackable as computer code and Magitek Power Pads and Remote Controls exist, but rule-based game elements don't appear, see Rewriting Reality. Overlaps with some of the stranger stories in The Game Plays You.

Alternative Title(s): Life Is A Game