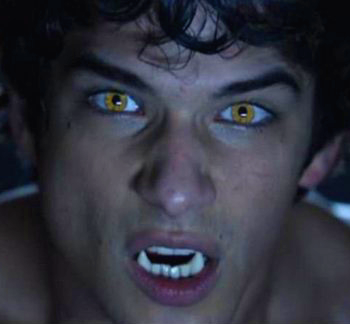 In the West, this tends to appear on supernatural characters who have feline or lupine traits, so, understandably, they're often accompanied by werewolf-like powers. In Japan, this probably traces back to legends of kitsune (foxes) and their naturally golden eyes. It was said that a human possessed by a fox would gain gold eyes, and that a child born to a fox and a human would possess them as well. Because kitsune were also shapeshifters, this often shows up when characters change their forms, as the first indicator they are shapeshifting.

In the sorting algorithm of "Uh-Oh" Eyes, gold eyes fall one step below Red Eyes, Take Warning, since it's entirely possible for the character to just be a trickster rather than evil. Gold eyes are also harder to distinguish from "normal"-colored eyes, and hence can add more of an element of surprise if The Reveal shows a character to be something other than what they initially appear to be.

Example of:
Glowing Eyes of Doom