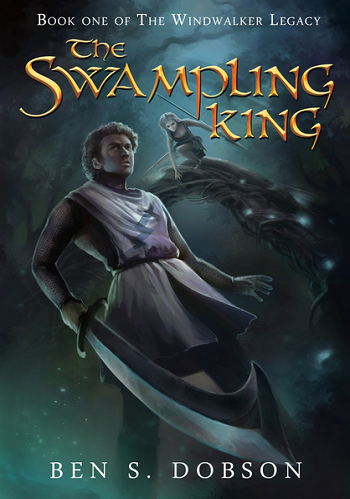 The people of the Swamp live in the shadows of the Peaks, forever fighting in a silent, dark, monster-infested wasteland. They have been abandoned by the rest of humanity, and desire nothing but to survive. The people of the Peaks live in constant fear of attacks from the monstrous deeplings, horrors born of the earth that constantly claw towards the fortresses in the sky. The highlanders believe that the swamplings control the deeplings, and send out troops to purge them every few years in an attempt to hold back the monsters.
Advertisement:

Prince Josen, the reluctant heir to the throne of the Peaks, finds himself stranded in the lightless Swamp, left for dead. He is forced to ally with the swamplings in order to return to the Peaks and prevent the enemy from taking advantage of an ancient prophecy to claim the throne for himself. Zerill, one of the swamplings, hates the highlanders for what they have done to her people, but works with Josen to put a stop to the purges.

And through it all, the Deepwalker, the true lord of the deeplings, stirs.

The Swampling King is the first book in The Windwalker Legacy series by Ben S. Dobson.