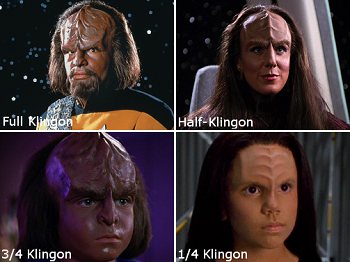 Due to the prevalence of the Interspecies Romance, half-human and other varieties of interspecies hybrid children are fairly common in fiction. These characters may in turn conceive or sire children with pure-blood members of either parent's species, producing a second generation with a majority of one species and a minority of the other.

Such individuals are likely to demonstrate various traits from their minority ancestor, though such traits are likely to be more subtle the farther back said ancestor is.

Despite the general belief that hybrids are always sterile, this is actually not uncommon in real life. It even has a name: "introgression"; the resulting mixture of DNA is known as "admixture."

Compare Half-Human Hybrid and Non-Human Humanoid Hybrid for simple half-and-half combinations. Once three or more species get involved, you're dealing with a Heinz Hybrid. May overlap with Semi-Divine. For human/nonhuman examples, compare But Not Too Foreign, where a foreigner has their nation of residence's ethnicity somewhere in their ancestry.