I Am Big Boned 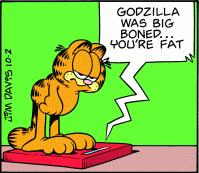 Overweight people can be very self conscious. It's understandable. We tend to associate many negative traits and behaviors with obesity. Thus, overweight people tend to come up with any excuse they can to avoid the stigma of being labeled as such. It isn't that they are fat, they are just big-boned. Or maybe it's just baby fat. Maybe they have a gland disorder or a slow metabolism. It has nothing to do with lack of exercise, or the triple cheeseburger, chili fries and chocolate-covered strawberries that they just ate.

In Real Life, many of these excuses are accurate in at least some cases, such as hypothyroidism.

A form of Insistent Terminology. See also Does This Make Me Look Fat?, Hollywood Pudgy, and Fat and Proud. Not to be confused with another kind of bone.

When Bad Bob gets called fat, he insists that he's just big boned, only to get himself stuck through the bathroom door.

When Bad Bob gets called fat, he insists that he's just big boned, only to get himself stuck through the bathroom door.