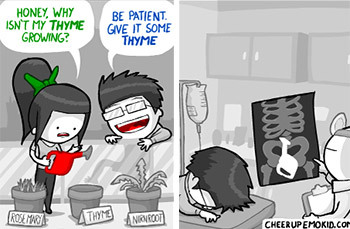 In scientific, medical, or high-security settings, X-Rays are used and may sometimes show funny and/or unusual things on the subject they are used on. In other scenarios, X-Ray Sparks can serve the same purpose.

Compare with Funny Terrain Cross Section. In medical settings, ultrasound may be used as an alternative. If that ultrasound shows unusual objects in a pregnant mother's uterus, see Prenatal Possessions.

Funky's brain is minuscule and is swimming in a skull full of water.

Funky's brain is minuscule and is swimming in a skull full of water.