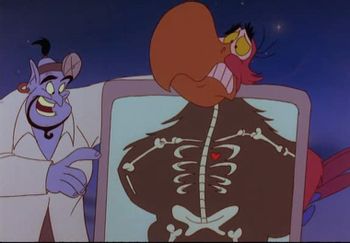 "An itty bitty heart, but it is there!"
"The Grinch hated Christmas — the whole Christmas season.
Oh, please don't ask why, no one quite knows the reason.
It could be, perhaps, that his shoes were too tight.
Or maybe his head wasn't screwed on just right.
But I think that the best reason of all
May have been that his heart was two sizes too small."
— How the Grinch Stole Christmas!, Dr. Seuss
Advertisement:

In comedic works it is common to sum up behavioral problems or character flaws as being the direct result of some greatly underdeveloped organ in a character's body. Maybe said character has a heart that is too small and thus cannot properly love or maybe their brain resembles the size of a golf ball and thus lacks normal intelligence. Of course, having an organ this small in Real Life would cause serious complications for most of these characters, so this trope is very often Played for Laughs.

That being said, there are numerous examples of this trope being played seriously as well, typically in the Medical Drama or Soap Opera realm. While cases of super-small organs in those works are still factually inaccurate, they are at least portrayed in a semi-realistic sense. For example, this trope could be invoked by a character born with some form of congenital heart defect where their heart is too small and will cause their death unless a replacement is found.

As this trope greatly exaggerates real body parts, it is a natural subtrope of Artistic License – Biology.

Not under any circumstances to be mistaken for Teeny Weenie.