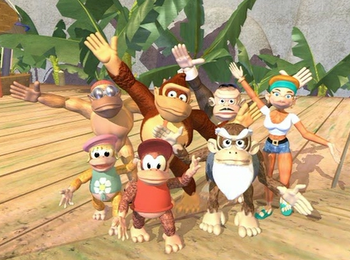 "Hoo! Hah! Hoo-Hah! Donkey Kong!
Heeeey, yo! Look out down below
Here he comes, banana-slamma!
Kongo Bongo's hero!"
- The show's theme song
A French/Canadian/Chinese-produced All CGI Animated Adaptation of the popular Super Nintendo Entertainment System game Donkey Kong Country. The series lasted from 1998 to 2000, airing in Canada on Teletoon and in the US on Fox Family.
Advertisement:

On the island of Kongo Bongo, The Hero of the series, Donkey Kong, is the island's future ruler, as selected by a magical orb called the Crystal Coconut, which has the ability to grant wishes (among numerous other things). But the Coconut is a prize coveted by the show's villain, King K. Rool, who aims to steal it and take over the island himself. Thus, DK has to always stand guard over it, which isn't an easy task since he's frequently taking time off to do activities such as eating his Trademark Favorite Food, bananas. Sometimes, another threat appears in the form of a group of Pirates led by Kaptain Skurvy, who believes the Coconut belongs to him. And did we mention there's a lot of singing? It happens at least Once per Episode.

While only a loose adaptation of the games, a few elements of the show would find their way into the games, particularly in Donkey Kong 64, where Crystal Coconuts are an item (but not a MacGuffin like here), Cranky Kong works as a potion-mixing Mad Scientist, and Klaptraps now have "dentures."

Parallel to the airing of Donkey Kong Country, Medialab (co-producer and animator of the first season) produced the programming block La planète de Donkey Kong (later retitled DKTV) for France 2 between 1996 and 2001. Outside of featuring some of the Donkey Kong Country cast, DKTV had little relation to the show or the Donkey Kong video games, being a succession of surreal, pun-heavy skits starring the Kongs as Animated Actors.

is available online in certain countries for free courtesy of Nelvana's Retro Rerun.

An unofficial musical theatre adaptation based on the TV series titled Banana Slamma, which combines the episodes “Ape-Nesia” and “Legend of the Crystal Coconut”, was released on YouTube on April 12, 2020 as part of MAGFest 2020, which can be viewed here

Tropes used exclusively in the show:

Everytime Skurvy recites his oath, he condenses it more and more for convenience sake.

Everytime Skurvy recites his oath, he condenses it more and more for convenience sake.