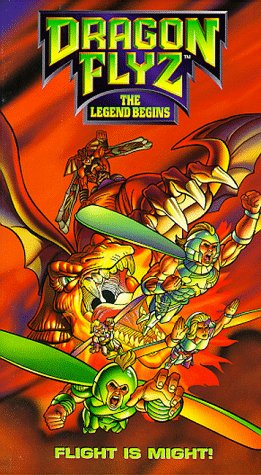 Dragon Flyz is an animated television series produced by Gaumont

in 1996. It ran a total of 26 episodes, and was based on the action figure line by the same name by Galoob Toys. (The Spear Counterpart to the infamous Sky Dancers)

The basic premise; an all but world-ending event known as the Cataclysm strips the Earth's surface of most lifeforms and leaves it a poisonous, volcanic wasteland. Humanity escapes complete extinction by fleeing to the upper atmosphere in a flying ark named Airlandis. This city in the sky is powered by orbs of a purple crystal referred to as 'Amber', generally found near lakes or rivers of molten rock. The Dragon Flyz are members of a paramilitary body not unlike the United States Coast Guard, in which they scour the wastelands of Old Earth to collect Amber and defend against the endless attempts at conquest at the hands of Dreadwing and his forces.