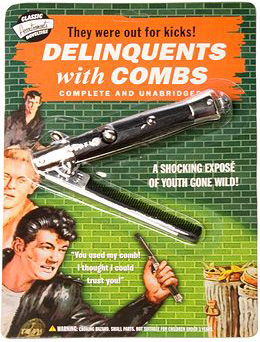 This character type appears in family-friendly works or works that have children as the intended audience. They are supposed to be a supreme badass, but are unfortunately hampered by their target audience. They are as much John McClane as can be squeezed by the censors, and they are often much tougher than their companions. Still, they are usually not allowed to smoke, drink, bed numerous people, swear, or do too much fighting or killing, and that is quite a list of hurdles to making them a rough-edged Mister Falcon.

Expect huge amounts of Gosh Dang It to Heck! and Never Say "Die", although they will use the worst euphemisms they can get away with and "curse" more often than their companions. Their favorite phrases are "kick some butt/tail" and "Shoot!" For some reason, this type of character tends to be Totally Radical.

The badbutt tends to use Family-Friendly Firearms. When they are wielding a sword, expect plenty of the Inverse Law of Sharpness and Accuracy. If they do get real guns, they'll never be shown actually shooting another person with them. If they're an assassin who uses any combination of those weapons, don't expect to see them kill anyone on-screen and especially don't expect them to succeed against the main hero.

Expect them to sound like Clint Eastwood, Bruce Willis, Arnold Schwarzenegger, James Cagney, Joe Pesci, or one of many other "tough-guy" actors. Occasionally it will be the genuine article, but more often they'll have a different voice actor do an impersonation.

Badbutts originally from mature works are commonly found in crossovers with family-friendly works.

Not to be confused with legitimately badass characters who happen to be from a kids' show, movie, etc. (e.g. the cast of the Star Wars: Clone Wars shorts). Has nothing to do with Gasshole.

Compare Clueless Aesop, another trope where being kid-friendly can get in the way. Rule-Abiding Rebel is when a character doesn't even try to come off as this. Also compare The Pirates Who Don't Do Anything, when a creator wants to depict a character with a badass profession, but never actually shows him or her doing anything related to said badass profession. Rated G for Gangsta is when a genuinely edgy public figure turns themselves into one of these for marketing reasons. This character may also use Parenthetical Swearing and/or Unusual Euphemisms. See also Defanged Horrors.