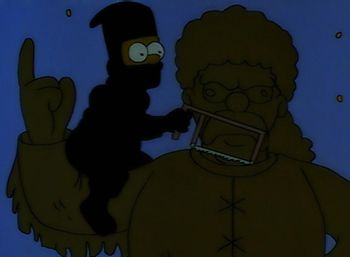 Cornered at the town square by a pitchfork and torch-wielding mob, Bart tells the rioting townspeople the story of how he stole the head of town founder Jebediah Springfield to impress some local thugs, Dolph, Jimbo Jones, and Kearney.

This is one of four episodes The Simpsons creator Matt Groening has a writing credit on.