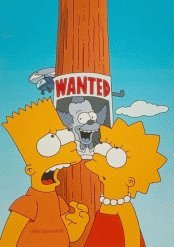 "Krusty, how could you?"
Advertisement:

"Krusty Gets Busted" is the twelfth episode of the first season of The Simpsons. The episode marks the beginning of the long-running saga of "Bart v. Sideshow Bob", as local kids' show host Krusty the Klown is arrested and convicted of robbing the Kwik-E-Mart, while Bart and Lisa do some sleuthing of their own to clear their hero's name and discover his sidekick was the actual perp.

All the kids in Springfield love Krusty the Klown, and each day after school, they religiously watch his hijinks on TV, which generally consist of slapstick routines featuring Sideshow Bob, Krusty's sidekick, as the victim. One evening, while on the way home (where Patty and Selma show Marge and the kids some vacation slides), Homer goes for some ice cream at the Kwik-E-Mart, which is robbed by a man dressed as a clown, which Homer identifies as Krusty in the line-up. By the time he gets home, Bart and Lisa discover their hero has been accused of robbery.

In court, Krusty spends his time fooling around, also admitting being illiterate (in spite of his famous "Give a Hoot, Read a Book" literacy campaigns) as well as betting on league sports, which is apparently illegal in the State of Springfield. As Krusty is sentenced to jail, a citywide campaign to destroy the clown's merchandise is led by Reverend Lovejoy (Bart's room is emptied) and his show is replaced by The Side-Show Bob Cavalcade of Whimsy, starring Krusty's former stooge, featuring readings of famous literary works and signing off with Cole Porter's "Ev'ry Time We Say Goodbye". Despite this, the Simpsons kids are sure Krusty is actually innocent, especially Bart, who is still loyal to him. Sideshow Bob similarly seems to feel sorry for him in public, but behind closed doors he is seen cackling maniacally.

Bart and Lisa visit the Kwik-E-Mart looking for clues. Recalling the robber read a magazine and heated a burrito on a microwave oven, they realize Krusty couldn't do it, not only because of his illiteracy, but also because the oven cannot be used by those with pacemakers (Krusty got one after having a heart attack on camera). When the kids try to get some clues from Bob, he gives them free tickets for his next show. Bart refuses to join in the audience's showing of admiration and is called to the stage, seizing the opportunity to finally grill Bob, who tells the audience Krusty never heeded medical advice and that one doesn't need to be able to read to enjoy magazine cartoons. When Bob says that he has "big shoes to fill", Bart remembers that the robber howled after Homer stepped on the oversized clown shoe, and that Krusty had small feet in court. Bart hits Bob on the foot with a mallet, revealing his large feet are real. The police, realizing they missed all the key clues, arrest Bob on the spot. He then confesses his hatred for Krusty after years of mistreatment and vows revenge on Bart. Krusty is freed and regains the trust of the townspeople, thanking Bart for never giving up on him. A photo of the two of them adorns Bart's bedroom.

"Krusty Gets Busted" contains examples of: