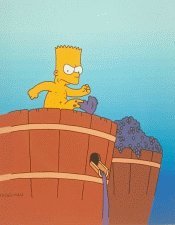 Marge makes Bart clean up his room after he cripples Homer by leaving his skateboard out near the stairs. While doing so, Bart discovers a cherry bomb, which he flushes down a toilet in the boys' bathroom at school—creating an explosion in the girls' room that drenches Principal Skinner's visiting mother, Agnes. Skinner visits the Simpsons and tells them that a troublemaker like Bart can benefit from the school's foreign exchange program, so Bart goes off to France, where a pair of low-rent winemakers keep Bart as a slave. Meanwhile, the Simpsons host an Albanian boy named Adil, and Homer begins taking a shine to him, but does Adil like Homer, or is he using him to get information on the nuclear plant for his country?