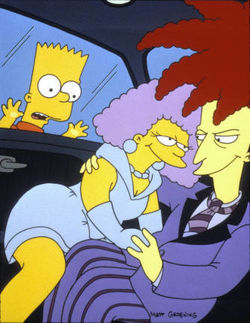 The Simpsons are getting ready to have dinner with Patty, Selma and Selma's new boyfriend. Of course, one can imagine their surprise when he turns out to be none other than Sideshow Bob, freshly released from his stay in prison after the events in "Krusty Gets Busted". While everyone is impressed at how much Bob has changed due to The Power of Love, Bart still fears that Bob is planning to kill him — or someone close to him.