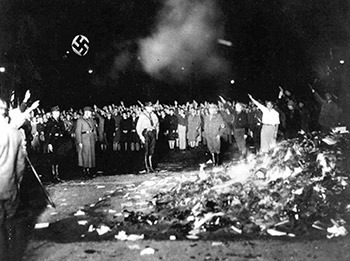 "Goose-stepping morons like them should try reading books instead of burning them."
"That was but a prelude; where they have burned books, they will ultimately also burn people."German original Das war ein Vorspiel nur, dort wo man Bücher verbrennt, verbrennt man auch am Ende Menschen.
— Heinrich Heine, from the 1823 tragic play Almansor.note His own work was burned by the Nazis over Heine being Jewish, and we all know what happened later...
Advertisement:

How do you show that your Police State is monstrous and trying to stamp out all free thought? Or that your Moral Guardians have crossed the line into Culture Police? Have 'em hold a good old-fashioned book burning!

The Book Burning is exactly what it sounds like: the incineration (preferably a big bonfire) of literature that threatens the government's authority or the Moral Guardians' values. It's Kill It with Fire used for censorship, or at the very least to make a statement. It doesn't have to be books — movies, music and artwork may also go on the fire. It doesn't necessarily have to be burning, either — dumping the books into a wood chipper or into the sea sends the same message.

Objectively speaking, book burning is far from the worst thing a totalitarian government or party could do. It is, after all, just ink and paper. However it's still considered especially heinous because it's considered an attack on knowledge itself, and symbolic of the crushing of intellectual freedom and of anyone who even thinks of disagreeing with their ideology.

Since Most Writers Are Writers, they usually have pretty strong feelings on this subject. Booksellers often have different, somewhat conflicted, feelings. If someone's buying armloads of books from your store, their intent to burn may not concern you much; at the same time, a totalitarian state that would resort to the destruction of books probably won't take kindly to the ones distributing them to the public. It's worth noting that, while the emotional impact of burning books hasn't changed with the digital age, the physical impact of trying to destroy books is largely mitigated by mass printing and e-format books.

Very much Truth in Television, but if you're looking for real-life examples, here's a list of book-burning incidents

. See why they can't be listed?note Additionally, since most libraries lack an infinite amount of space, books that fall into disrepair or haven't been checked out in ages are disposed of by paying a company to burn them for you; not the most environmentally sound way to get rid of books, but also not this trope

Alternatively, the trope can be used in a non-political manner; a group of survivors from an incident may have to burn books just to keep themselves warm. Also, students sometimes celebrate finishing a particularly hard or painful class by burning their textbooks and notes.

Example of:
Bigger Than Jesus