Western Animation / Scooby-Doo, Where Are You! 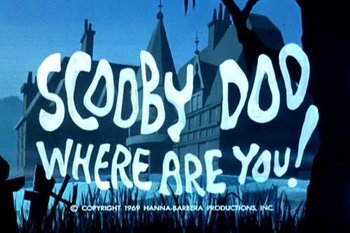 Scooby-Dooby-Doo, where are you? We've got some work to do now!
"And I got away with it thanks to those meddling kids and their dog."
— Iwao Takamoto, character designer for Scooby-Doo, Where Are You!, discussing the show's success
Advertisement:

Scooby-Doo, Where Are You! is a popular animated television series created by Hanna-Barbera, launched all the way back in 1969. It consisted of two seasons which originally aired Saturday mornings on CBS. The series spawned the famous Scooby-Doo franchise, which continues to this day, over fifty years later, outliving both its creators and the studio that produced it.

The series that started it all featured a gang of four mystery-solving teenagers, and their talking Great Dane, Scooby-Doo. In each episode, Mystery Incorporated runs into some sort of paranormal activity, and it's up to them to solve the case. In nearly every episode, however, it just turns out to be a man in a mask, though the gang never seems to catch onto this.

Created by Joe Ruby and Ken Spears based on an idea by CBS exec Fred Silverman, Scooby-Doo was originally called Mysteries Five and was supposed to be an updated version of old-time Radio Drama classics like I Love A Mystery and Armchair Detectives. It was the first children's cartoon to feature characters resembling "contemporary youth", and the five teens comprised a rock band (and their dog, here named Too Much) who solved mysteries on the side. Ruby and Spears' original scripts were a bit too nuanced and intelligent for the higher-ups

at CBS, who deemed it "too scary for children" and demanded it be "toned down".