Rise from Your Grave 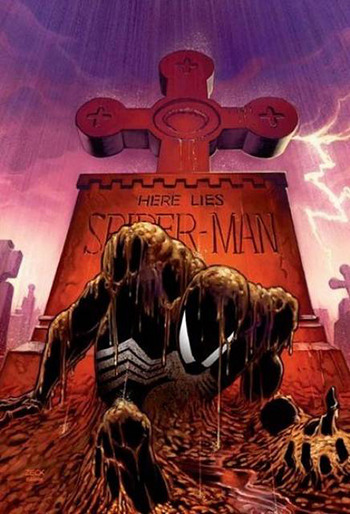 Spider-Man, coming back wrong.
"He grabbed onto some grass and climbed, pulled himself up out of his own grave, and looked at the time
On a watch that had stopped six months after the shots that had got him in the box."
— Lupe Fiasco, "The Cool"
Advertisement:

Bob's come Back from the Dead! The only problem is that it took several days/months/years to happen, and nobody was expecting him to need a way out of the ground. With nowhere to go but up, he starts clawing his way out, eventually making it out.

Basically, any scene where someone comes back to life inside a coffin and has to dig their way out of the ground. These days, it's pretty much the standard practice for zombies and vampires (or at least the first ones to start spreading the undead plague), but it's especially notable when it happens to normal folks, who seem pretty horrified at the act and certainly weren't expecting to have to do it themselves.

Depending on the character, the reason for doing this varies. Bob may have been thought to have been dead, and was Buried Alive, or perhaps he was given a second chance a bit too late, and had to get out the hard way.

Note that you shouldn't expect this to be possible in real life: Six feet of dirt are heavy. Also, go to any modern morturary. Anything breaking out of those metal streamlined megaboxes we call coffins these days had better have Super Strength. Not to mention that even if you could escape from a box under six feet of dirt somehow, it still wouldn't result in the usual sight of a hand popping out of the ground: instead, the displacement of all that dirt would result in a huge mound popping up ahead of you.

See Also: Buried Alive, Back from the Dead.

Compare: Waking Up at the Morgue