Film / Tales from the Crypt 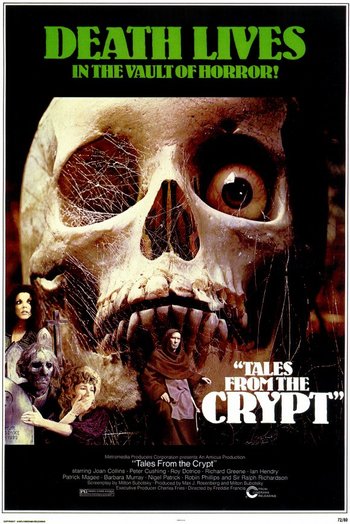 Three of these tales ("All Through the House", "Blind Alleys" aka "Revenge is the Nuts", and "Wish You Were Here") were later adapted into episodes of the Tales from the Crypt television series.

It was followed in 1973 by a second anthology of EC stories, Vault of Horror.

Recieved something of a Spiritual Sequel in the Tales from the Hood series.

Synopsis (From Wikipedia, with additions):

Five strangers go with a tourist group to view old catacombs. Separated from the main group, they find themselves in a room with the mysterious Crypt Keeper (Ralph Richardson), who presents each of them with visions of how they will die.

After Joanne Clayton (Joan Collins) murders her husband (Martin Boddey) on Christmas Eve, she prepares to hide his body but hears a radio announcement stating that a homicidal maniac in a Santa suit (Oliver MacGreevy) is on the loose. She sees the maniac outside her house but can't call the police because of her husband's body.

Reflection of Death (Tales from the Crypt #23)

Carl Maitland (Ian Hendry) abandons his family to be with Susan Blake (Angela Grant). After they drive off together, they are involved in a car accident. He wakes up in the wrecked car and attempts to hitchhike home, but no one will stop for him. Arriving at his house, he sees his wife (Susan Denny) with another man. He knocks on the door, but she screams and slams the door. He staggers to his lover's house and is received, but she reveals she was blinded in the same car crash that killed her lover...

Poetic Justice (The Haunt of Fear #12)

Edward Elliott (David Markham) and his son James (Robin Phillips) are a snobbish pair who resent their neighbor, elderly garbage man Arthur Grimsdyke (Peter Cushing) who owns a number of animals and entertains children in his house. To get rid of what they see as a blight on the neighborhood, they push Grimsdyke into a frenzy by conducting a smear campaign against him, first resulting in the removal of his beloved dogs (while one of them came back to him), getting him fired without pension, and later exploiting parents' paranoiac fears about child molestation. Grimsdyke, in despair, eventually hangs himself, but one year later...

A variation on W. W. Jacobs' famed short story "The Monkey's Paw". Ruthless businessman Ralph Jason (Richard Greene) is close to financial ruin. His wife Enid (Barbara Murray) discovers a Chinese figurine and wishes for a fortune. Ralph is killed on the way to his lawyer's office, the lawyer then advising Enid she will inherit a fortune from her deceased husband's life insurance plan. She uses her second wish to bring him back to the way he was just before the accident but learns that his death was due to a heart attack (caused by fright when he sees the figure of 'death' following him on a motorcycle).

Blind Alleys (Tales from the Crypt #46)

Major William Rogers (Nigel Patrick), the new director of a home for the blind, makes drastic financial cuts, reducing heat and rationing food for the residents, while he lives in luxury with Shane, his Belgian Malinois. When he ignores complaints and a man dies due to the cold, the blind residents, led by George Carter (Patrick Magee) exact revenge.

The confused and baffled strangers ask why they were shown these visions, and the Crypt Keeper reveals that he wasn't warning them of future events, but explaining why they had been sent to Hell.