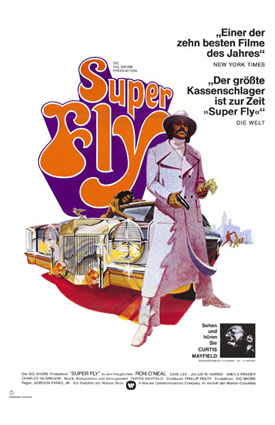 Ron O'Neal stars as Priest, an up-and-coming successful cocaine dealer in New York City. After getting mugged by two junkies, he realizes that his profession will eventually only end in death or prison, so he decides it's time to call it quits. In order to raise money to start a fresh, crime-free life, however, he needs to perform One Last Job by making a 30 kilo deal. Too bad that almost every person he interacts with (save two obligatorily antagonistic white cops) seems to make it their mission in life to keep him in the business...

This film is known for its soundtrack, written and produced by soul singer Curtis Mayfield. Super Fly is one of the few films ever to have been out-grossed by its soundtrack. Ironically, in later years, Mayfield came to hate the film, calling it "a TV commercial for cocaine."

Some critics believe the film's glorification of drug dealers serves to subtly critique the civil rights movement's failure to provide better economic opportunities for black America and that the portrayal of a black community controlled by drug dealers serves to highlight that the initiatives of the civil rights movement were far from fully accomplished.note Indeed, one protest when the film was first released was organized by civil-rights activist and future Washington, D.C. Mayor Marion Barry, who ironically would himself be arrested years later in a 1990 cocaine sting

However the filmmakers maintain that it was their desire to show the negative and empty aspects of the drug subculture. This is evident in the movie from the beginning as Priest communicates his desire to leave the business. As said above, nearly every character in film, with the notable exception of his main squeeze, tries to dissuade Priest from quitting; their chief argument being that dealing and snorting is the best he could ever achieve in life. This contrast underscores a major theme in artistic works - the individual vs the group collective.

The film was remade in 2018, with Trevor Jackson (grown•ish) taking over the lead role, and directed by Julien Christian Lutz (a.k.a. Director X).

The 2018 remake contains examples of: