Film / Tales from the Darkside: The Movie 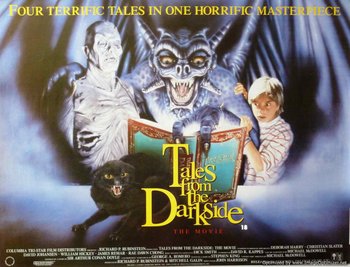 A horror Anthology Film based on Tales from the Darkside television series, released 1990.

In the film's Framing Device, Betty, a modern day witch, has captured a little boy named Timmy (Matthew Lawrence) in order to cook him and serve him at a dinner party for her fellow witches. Timmy stalls her by reading three tales from the favourite book of her childhood: Tales from the Darkside.

The film in general:

Alternative Title(s): Tales From The Darkside