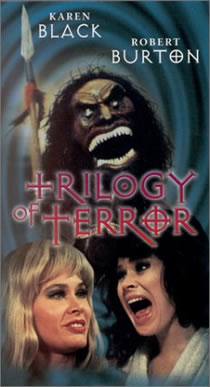 Trilogy of Terror is a 1975 made for TV horror anthology film. Directed by Dan Curtis, it consists of three segments which are based on short stories by Richard Matheson. Karen Black stars in all three segments, playing a different lead role in each.

A sequel to the movie was released in 1996, which was also directed by Dan Curtis.