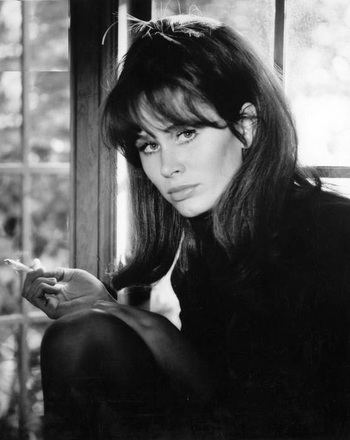 "If you can write it, I can be it."
Advertisement:

Black began her acting career in the 1960s on the New York stage and in television before landing her first major film roles in Easy Rider (1969), Five Easy Pieces (1970), and The Great Gatsby (1974); her performances in the latter two earned her Golden Globe Awards for Best Supporting Actress, with Five Easy Pieces also garnering her an Academy Award nomination. Other films she appeared in during the '70s include Airport 1975 (1974); Robert Altman's Nashville (1975); John Schlesinger's The Day of the Locust (1975), which earned her a third Golden Globe nomination; and Alfred Hitchcock's Family Plot (1976).

In 1975 and 1976 respectively, Black appeared in Dan Curtis's cult horror films Trilogy of Terror and Burnt Offerings; this would lead to her starring in a variety of horror films through the 1980s and '90s, as well as writing her own screenplays, before her appearance in Rob Zombie's House of 1000 Corpses (2003) cemented her status as a cult horror icon. Black continued appearing in several low-profile films throughout the early 2000s, as well as working as a playwright, prior to being diagnosed with ampullary cancer in 2010; she succumbed to the disease in August 2013.