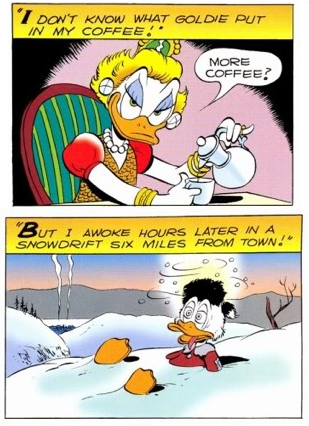 Tricking someone into drinking a drugged beverage although sometimes food can be spiked as well. One of the most common causes of Instant Sedation next to a Tap on the Head. Typically done to knock out a Mook, to capture a good guy for evil purposes (such as pressganging them onto a ship), or to rob or Date Rape the victim. If the other person suspects something, they may discreetly dispose of the drink or attempt a Poisoned Chalice Switcheroo. Attempting to do this to several different people at once can overlap with One Dose Fits All.

The person who's been drugged (or is doing the drugging) may have some Parting-from-Consciousness Words. There's a good chance that the victim will have an Impairment Shot as they are losing or regaining consciousness.

Subtrope of Artistic License – Law. When this is done by adding a lethal drug to outright kill someone, see Tampering with Food and Drink. Especially in older works, a Poison Ring is used to dump the drug into the beverage. Compare Laxative Prank.

Truth in Television: Read all about the original Mickey Finn on Wikipedia

Kaftan drugs Victoria's coffee to knock her out.

Kaftan drugs Victoria's coffee to knock her out.