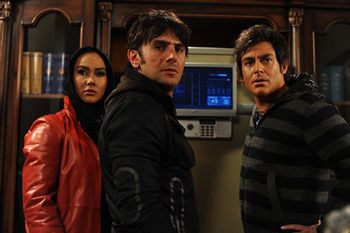 Two small-time con men, Sami (Golzar) and Davood (Hayai) think they have the break of their lives when they hear of a crown containing three rubies that is ripe for the stealing. Unfortunately, the crown and rubies are scattered around Tehran, and the duo need to form four separate plans to steal them all...

This film contains instances of: