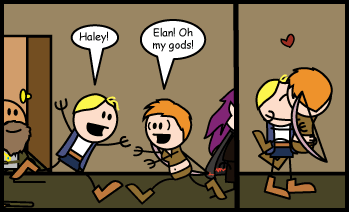 Never thought that you would be
Standing here so close to me
There's so much I feel that I should say
But words can wait until some other day
Kiss me once, then kiss me twice
Then kiss me once again
It's been a long, long time
— Kitty Kallen, "It's Been a Long, Long Time"
Advertisement:

Alice and Bob have been separated for a long time; then, when they finally see each other again after the separation, a number of things can happen. They might rush towards each other, one may walk to the other in a daze, or one might come up behind the other and put a hand on their shoulder. Then they embrace, with one babbling about how much they missed the other while covering them in kisses, or they share a long passionate kiss, or they kiss repeatedly. Either way, tears and laughter are sure to be plentiful, from them as well as from their friends and comrades. Is usually heartwarming.

In short, all the torment of their separation and its surrounding events is released in a shower of mixed emotions and sealed with a kiss.