Right Under Their Noses 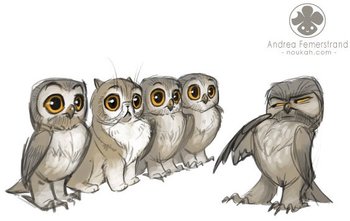 .
"The closer we are to danger, the further we are from harm."
— Pippin, The Lord of the Rings: The Two Towers
Advertisement:

The safest way to avoid detection in stories is always, well, right under the enemy's nose — the last place they'll ever think to look.

This is true even if the antagonist or whoever the hero is avoiding has all his forces concentrated in an easily avoidable heavily armed complex. Despite the fact that the Sword of Plot Advancement is not to be found there, the hero must encounter the Damsel in Distress somehow.

Even when it would make more sense to avoid the enemy stronghold altogether, the seasoned marksmen who swarm the wilderness are always much more likely to capture our heroes if they attempt to sensibly bushwhack away from the enemy camp, whereas the soft green recruits at the main gate would never imagine someone walking up to the Front Door.

Compare Hidden in Plain Sight. See also Walk into Mordor, We Need a Distraction, Throwing the Distraction, So Much for Stealth.