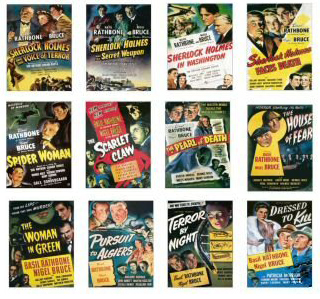 A crime a dozen!
"Sherlock Holmes, the immortal character of fiction created by Sir Arthur Conan Doyle, is ageless, invincible and unchanging. In solving signficant problems of the present day he remains ~ as ever ~ the supreme master of deductive reasoning."
— Opening Title Card
Advertisement: