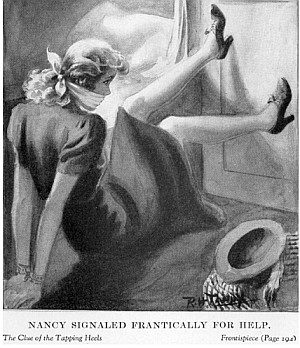 The hero is Bound and Gagged. With no avenue of escape, and severely restricted movement, what is there to do?
Advertisement:

Well, assuming there's no Conveniently Placed Sharp Thing nearby to cut the bonds, there's only one thing to do: Get attention in the hope of attaining rescue.

The simplest and most common (and often, the only) way to do this is to make noise. Banging on a wall or floor with bound feet, or making noise through a gag, are the most common. If the captive has a bit more freedom of movement, then knocking things over could work, or making a signal of some kind. If the captive is lucky, which happens the majority of the time, it'll be the heroes who hear the noise and come to the rescue. Sometimes, it's instead the villains, who then do a better job of restricting the captive. Other times, there's nobody around to hear the captive's attempts at rescue.

Note that merely struggling and making noise out of frustration is not this trope. Only if the captive is making noise with the goal of obtaining rescue, would it be Banging for Help.

If the captive is more savvy, he or she will bang in Morse code, which ensures that somebody will come by and realize what the message is and come to the rescue. Because, you know, Everyone Knows Morse (at least enough to recognize the alternating three-short-three-long SOS signal).

Has nothing to do with having sex to summon aid, although that certainly would be something.