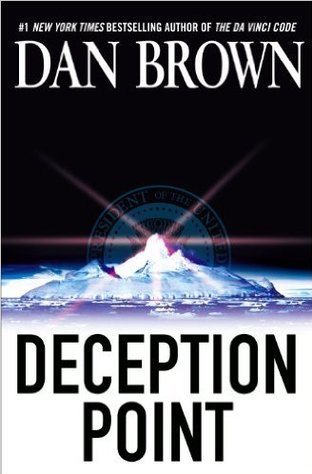 Deception Point is a 2001 novel by Dan Brown, published between Angels & Demons and The Da Vinci Code.

Rachel Sexton is a single, attractive Intelligence Analyst for the National Reconnaissance Office (NRO). She has a strained relationship (with good reason) with her father, Senator Sedgewick Sexton, who's currently running for President against the incumbent President Zachary Herney. The Senator has been gradually gaining support due to focusing on an overlooked issue: the fact that NASA has cost the tax payers billions of dollars that would have been better spent elsewhere with little results beyond a string of blunders and "pictures of space dust". Sexton denounces Herney's enthusiastic support of NASA as harmful and plans upon election to dismantle NASA and open up space exploration to the private sector, something that obviously causes a lot of people to fear the worst.

One day, straight out of the blue, Rachel is summoned by the President and then sent to Ellesmere Island in the Arctic, all in utmost secrecy as to why. There she meets Michael Tolland, a celebrity oceanographer and documentary host, and Corky Marlinson, a highly respected astrophysicist. Both are members of a special civilian scientist team assigned to investigate an "amazing find". Said "find" being a meteorite embedded in the ice containing fossils similar, but not identical, to species found on Earth; in other words, conclusive proof of extraterrestrial life. NASA is incredibly excited, and hopes this will serve as proof that NASA deserves its continued existence...

...However, Michael then notices an irregularity in the meteorite's extraction pit. He, Rachel, Corky and experienced glaciologist Dr. Norah Mangor venture into the Arctic wastes to survey the extraction pit with ground penetrating radar and make a shocking discovery: the meteorite was actually drilled into the shaft, after which the salt water under it froze. The discovery is actually false!

Before they can tell anyone of this, they are immediately attacked by a Delta Force team apparently sent to prevent this from coming to light. What follows is a struggle to survive the ordeal and find out the truth: did NASA stage the discovery and prevent its potential dismantlement in case Sexton wins the election? Or was it the current administration, going to extreme lengths to stay in office? Meanwhile, Senator Sexton sends his assistant, Gabrielle Ashe, to investigate the matter after noticing some inconsistencies himself. What she finds, however, will not only cause her to doubt NASA's integrity but also that of her employer...

This novel features examples of: