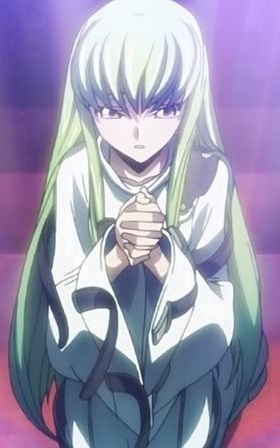 This is a stock pose. Males can be found doing it, but it's especially common among females, particularly within promotional material. The hands are clasped or the palms meet each other (this is a variation with the same emotional meanings) either in front of the chest or in front of the face. Light radiating from either the background or the hands is a common added touch. This is a gesture that generally indicates prayer of some kind, but not always. Sometimes, it's used more for its emotional value, in order to indicate someone who is pure of heart instead. Bonus points if it happens in a church.

open/close all folders
Anime & Manga
Art
The people in the bottom row of Freedom from Worship (Four Freedoms). The Catholic woman is clasping a rosary in her hands, while the Protestant woman and a man behind her of indeterminant religion have their palms clapped together.
Comic Books
Advertisement:
Fanfic
Films — Animation
Films — Live-Action
Literature
Live-Action TV
Music
Pro Wrestling
Tabletop Games
Video Games
Web Animation
Web Comics
Real Life