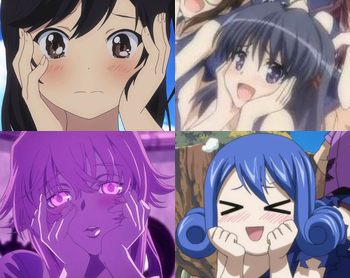 A body language, specifically for face and hands. Often a sign of cuteness. It conveys many of the following things:

Compare Face Palm, which deals with stupidity and humiliation (whether your own or other people's). See also Faux Paw, which is also often used for cuteness. See also "The Scream" Parody, the art world's most famous palm-on-cheek pose.