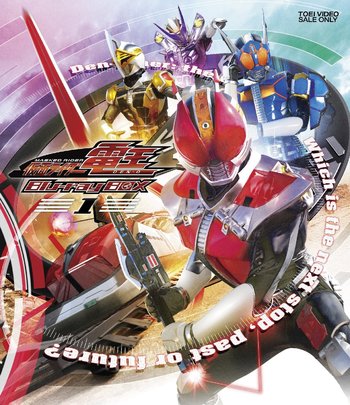 "Traveling through time. Here I come!"
"DenLiner, the train of time. Which is the next stop, past or future?"
Advertisement:

Kamen Rider Den-O is the 2007-2008 series of Kamen Rider and the eighth installment in the Heisei Era.

Ryotaro Nogami is the unluckiest guy in the universe. But his life changes on the day he stumbles across a mysterious train pass that allows him to board the DenLiner, a Cool Train that travels through time.

Just as he is recovering from the shock of this, he is suddenly possessed by a monster known as an Imagin: shapeless creatures from the future that take on forms based on the ideas within their host's imagination. The Imagin make contracts with their hosts to gain physical bodies, offering to grant them a single wish. Once the wish is fulfilled, they can then use their host as a gateway back through time, aiming to destroy the past to seize control of the future.

However, it turns out that Ryotaro is a Singularity Point, a person immune to any changes to the timeline and able to resist the possession of his Imagin. He is soon corralled by Hana, a mysterious passenger of the DenLiner, into using his power as a Singularity Point and his Rider Pass to transform and fight the hostile Imagin invaders as Kamen Rider Den-O.

While Den-O's base form (Plat Form) is incredibly weak, Ryotaro can relinquish control of his body to an Imagin who has possessed him and power up. His first Imagin, a Hot-Blooded Boisterous Bruiser called Momotaros, transforms Den-O into the red Sword Form. Together, They Fight Crime!.

The plot thickens when Ryotaro discovers that Yuto Sakurai, his sister's missing fiance, is hiding in the past for reasons unknown, and somehow linked to the Imagin attacks. Just as Ryotaro goes to confront him, he is stopped by none other than a younger version of Yuto Sakurai. This version of Yuto is brash and cocky, bringing with him his own Time Train called ZeroLiner and the ability to transform into Kamen Rider Zeronos.

Despite average television ratings, Den-O proved to be a massive hit in Japan - such that on Kamen Rider's 50th anniversary in 2021, the series was voted #1 series in the Heisei era and #1 series overall by the general Japanese public in NHK’s All Kamen Rider Popularity Ranking - spawning multiple character song CDs, a spinoff anime starring the Imagin and eight movies, which is practically unheard of for a television series that was only designed to last a year:

Partnered with the Super Sentai show Juken Sentai Gekiranger after initially airing alongside the final episodes of GoGo Sentai Boukenger in the Super Hero Time block.

From start to finish, the Character Page is always at a climax!

I don't have any tropes left to faint!

In the version of Climax Jump, the show's theme song, sung by the Taros, there is a brief segment where the song changes pace entirely as Ryutaros delivers a rap, only to go right back to normal not long after.

In the version of Climax Jump, the show's theme song, sung by the Taros, there is a brief segment where the song changes pace entirely as Ryutaros delivers a rap, only to go right back to normal not long after.