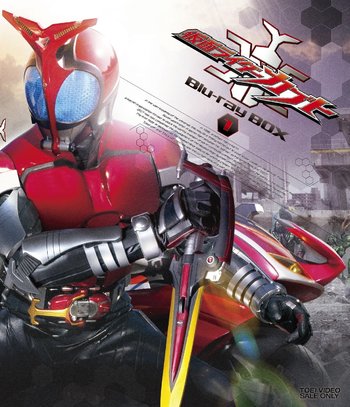 Grandmother said this... "The man who walks the path of Heaven, and rules over all."

Kamen Rider Kabuto is the 2006-2007 series of Kamen Rider and the seventh installment in the Heisei Era. Also notable for being the 35th anniversary series of the Kamen Rider franchise.

In 1999, a meteor fell to Earth and obliterated the Shibuya district of Tokyo. Along with the destruction the meteor brought something far more dangerous: the Worm, an insectoid race of aliens with the ability to perfectly mimic the appearance and memories of a human. Seven years later, the Worm have infiltrated society and are slowly killing off the human race, replacing them with their own.

Earth's only defence lies in the secret organization ZECT, who are losing ground against the evolved Worm and their Clock Up ability. To counter this, ZECT develops the Masked Rider System and Kabuto Zecter weapons, which new recruit Arata Kagami is eager to try out.

Enter Souji Tendou: genius chef, philosopher, loving brother, martial arts expert and all-round Ace at everything he does (also, kind of a dick). During a Worm attack, Kagami calls out for the Kabuto Zecter but instead it goes to Tendou, who proclaims that he is The Chosen One and uses it to transform into Kamen Rider Kabuto.

Partnered with the Super Sentai show GoGo Sentai Boukenger after initially airing alongside the final episodes of Mahou Sentai Magiranger in the Super Hero Time block.

Voted #13 series in the Heisei era, and #20 product overall in NHK’s All Kamen Rider Popularity Ranking.

"Walking the Path of Heaven. Ruling Over Us All."