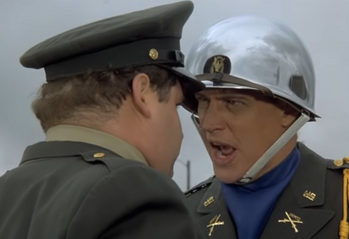 "A PPPLEDGE PPPIN?!? ON YOUR UNIFORRRMMM?!"
"Get up, you faggots! Get up and charge!"
— Doug Neidermeyer, Animal House
Advertisement:

The military equivalent of the Sadist Teacher.

A commanding officer with zero respect for his troops, and probably plenty for himself. Because of his demonstrated incompetence, cowardice, inexperience, willingness to sacrifice his men for his own glory while keeping himself safely out of harm's way, an obsessive desire to get promoted, or just being a psychotic-level hardass, his authority is resented by the men in the trenches, and his orders are only obeyed because chain-of-command says so.

In more upbeat war shows, he's usually forced to learn An Aesop about his awful command style and adjust his behavior in a way that either changes him into a likable officer or results in his resignation, demotion, or transfer to a more suitable post.

In more cynical war movies, there will be no escape from this petty and obnoxious brute, and the men simply grouse and wait for the day someone on the opposing side will get lucky and catch him in the crosshairs. The troops might even conspire to frag him themselves if they get tired of waiting for the enemy to do the job.

If he is too tough to frag, though, the (un)lucky survivor of his tirades will become either a Yes-Man with no more backbone than he started off with, with a sense of "loyalty" to him, or The Dragon who seeks to become his successor when he dies/moves on. In a best-case scenario, the successor may show much competence and merely view the man as a Cynical Mentor or Drill Sergeant Nasty, but not always. In this case, the other troops will remain as spiteful as ever, but find that the converted will easily take care of any sort of mutiny they try to pull off.

A Drill Sergeant Nasty just acts like one, with the purpose of turning recruits into soldiers. A Sergeant Rock may act like one but is nonetheless held in high regard because he wouldn't put his men through anything he wouldn't go through himself. The Neidermeyer may believe he is either or both.

If he's a crusty, tough-as-nails long-term veteran commanding officer who has lost touch with reality and is filled with irrational hatred and paranoia against a specific foe, he's a General Ripper.

See also Miles Gloriosus for a broader application of this trope.

This trope goes often goes hand in hand with The Peter Principle: the leader has simply advanced or been promoted to a level too high for his capabilities.

The polar opposite of this trope is "A Father to His Men" (into which the Neidermeyer may well evolve). There is also the Veteran Instructor, an instructor who has distinguished himself in battle and now is teaching new recruits, fully cognizant and respectful of the realities of war and training, which typically earns considerable respect from his trainees. In many cases, a General Failure is basically a Neidermeyer with greater rank and thus even more scope for causing damage. If the Neidermeyer is a temporary replacement for the usual Reasonable Authority Figure, it may also be a Tyrant Takes the Helm story. The Sister Trope - a low-ranking leader, such as non-commissioned officer, lacking in authority or hated by his men is Gung Holier Than Thou.

Completely unrelated to the founding editor of CurbsideClassic.com. Or the Hockey Hall of Famer.