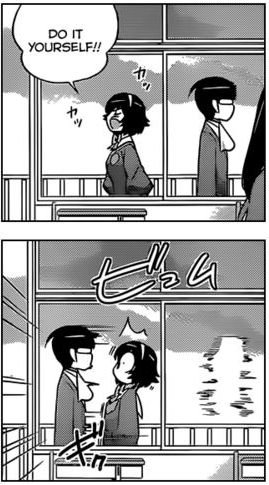 "I'd like [Iron Tager] to be able to cross the screen in 30 frames..."
— Kokonoe, BlazBlue: Calamity Trigger, "Teach Me! Ms. Litchi!" (episode 5)
Advertisement:

Making use of a short burst of Super Speed that in practice gets used more like teleportation. Sometimes rather than Super Speed, a Flash Step will use actual teleportation. A standard attack, especially in any show with Charles Atlas Superpower-level martial arts. A Flash Step will cause the user to suddenly appear either right behind the opponent (often making some sort of snarky comment about how the person is Too Slow) or a short distance past the person facing away from them. One of two things may then occur—the user attacks the opponent before they have time to register their presence, or it turns out to have been a Single-Stroke Battle and the user landed the fatal hit while moving, the opponent not realizing it until the coolest / funniest moment. Some other stories have different outcomes, like the user starting to talk about how s/he has the speed advantage instead of actually attacking, or the user becomes the victim of the opponent's own Flash Step. Occasionally both users keep using Flash Step instead of actually attacking for quite a while and just exchange insults until finally one of them loses the speed fight, or someone else steps in to disrupt them.

This often comes with a bit of Artistic License – Physics: Very rarely do you find someone who translates the momentum of their Flash Step into the punch/kick/noogie, something done because Newton's Laws still otherwise hold in most pieces of fiction, so it doesn't get the shattered bones on both sides of such an attack like one would expect.

Also, don't expect the air or other surrounding objects to behave as though someone dashed by them at half the speed of light, nor the ground to buckle from the force (unless they're also traveling vertically), nor their shoes to slip or in any other way refuse to provide the incredible traction necessary to accelerate that much, except of course when the terrain is obviously slippery. For that matter in the other direction, if you consider their speed based on the amount of distance they travel and the time it takes, it's often questionable why they disappear from sight at all.

Often combined with Rapid-Fire Fisticuffs when used in combat. May result in Speed Blitz, but beware if Inertia Is a Cruel Mistress. When two people do this repeatedly, see No, I Am Behind You. Also often used to avoid actually animating fight scenes, which with the flash step can be a slideshow of sword clangs and a woosh sound to indicate the characters are moving so fast you can't see them. Alternatively, what seems like a flash step in-universe can be represented to the audience by a character moving at "normal" speed in a Bullet Time sequence. Depending on the work it may be possible to do this in midair without any footing, resulting in Not Quite Flight. See also Offscreen Teleportation, Villain Teleportation and Doppelgänger Spin when the person is so fast they leave afterimages. A possible (but rarely used) explanation for the Stealth Hi/Bye.

Bonus points if the user sways from side to side at first, leaving mini-afterimages.

May cause a Snap to the Side moment.

This was originally invented as a budget-saving technique on early anime, especially Shōnen Demographic Fighting Series. It was easier to have a character just appear in a new location than to animate them moving. Over time, it became an accepted part of the genre, and continued to show up when technology advanced and animation became cheaper, or even showed up in places where animation simply wasn't an issue (such as manga or literature). Compare Ghostly Glide.

The academy agents discuss agent Djin's ability, which appears to be disappearing into smoke and reappearing. Rudy contests that it was due to his speed that he appeared that way, and smokescreens were used to cover him.

The academy agents discuss agent Djin's ability, which appears to be disappearing into smoke and reappearing. Rudy contests that it was due to his speed that he appeared that way, and smokescreens were used to cover him.