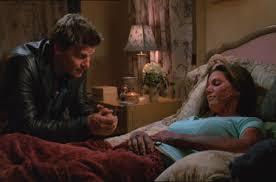 At the hotel, Wesley and Gunn eat take-out with Fred, who has finally emerged from her room but it sitting under the table and is grading their attempts to be sincere towards Cordelia, who is on edge having not had a vision in a while. Suddenly Gavin Park, a lawyer from Wolfram & Hart, shows up at Angel Investigations and is met with a frosty reception by Wesley who recoginises him from his previous visit before Angel arrives. Gavin is attempting to cause more trouble for the gang regarding their lease. He gives them a list of 57 code violations they are guilty of, in an effort to drive them out of their building but Angel is unimpressed and Gavin leaves before promising to return.

Suddenly, Cordelia gets a new vision and the pains that accompany her vision take a turn for the worse as a vision of a creature with claws causes deep claw marks to appear on her back, stomach, and shoulder. Angel expresses great concern about Cordelia's condition, but she conceals the claw marks from him because she does not want to stop having her visions. The gang heads out to find a magical coin Cordelia saw in the vision. The team relatively easily dispatches a pair of demons disguised as an elderly couple from Cordy's vision, and obtains the magical coin.

At Wolfram & Hart, Gavin Park talks to Lilah Morgan. She is threatened by Park's presence and his offer for her to join "his" team's attack on Angel via code violations, as she feels her position is superior to his.

Cordy has a second vision—this time of a demon covered in boils, and in reaction, boils erupt all over her face, too. The team is troubled, wondering why the Powers That Be would afflict Cordy in this way. At Fred 's suggestion, the team tries to trace the source of her visions—they bring Lorne to investigate, while other members of the team obtain a key from the vision.

At the Hyperion, Gunn and Fred come upon exterminators fumigating the hotel. Gunn quickly kicks them out.

Meanwhile, at Wolfram & Hart, the true source of the visions is revealed: Lilah has hired a psychic to send the visions to Cordy. The third vision of the night is the most violent one yet, and Cordelia's skin becomes burned at a vision of fire, while Lorne is thrown across the room by the power of the vision. Cordelia is extremely demoralized and says she doesn't want visions anymore, and that she is frightened all the time, despite her brave attempts to remain stoic, and her selfless embrace of earlier visions because she was happy to be helping people. Lorne confirms that the visions aren't coming from the Powers that Be, and someone must have jacked the line to send their own message. The gang realizes the source of the visions must be Wolfram & Hart and Angel confronts Lilah, who explains that Angel must free a man in another dimension who has been "wrongfully imprisoned", using the coin and key to travel there.

At the hotel, Wesley's research has turned up information on the coin and key which shows them to be objects of good meaning the guardians that Angel fought off were likely on the side of good too. Wesley points out to Angel that helping Wolfram & Hart is against everything he fights for, and its likely the prisoner deserves to be there. Despite all that, Wesley agrees with what Angel is doing (since it's to save Cordy) and is ready to go along but Angel asks him to stay in case anything goes wrong.

Angel travels to the new dimension, but his weapons are prevented from being transported with him. At his destination, there is a cage made of fire, where a being is constantly being burned yet not consumed inside of it, and is being guarded by a frightening demon namedSkip. Angel and Skip speak, realize they are on the same side ultimately, but that Angel must act against Skip in this one instance. Angel defeats Skip and returns with the being to Los Angeles. Angel Investigations meets Wolfram & Hart at a levee in LA, and the prisoner is handed over to Lilah, who then restores Cordy to health. As Lilah turns to leave, she explains that "it's just business." At that, Angel hurls a rebar through the window of Lilah's limo, killing the psychic who was causing the visions. Angel then threatens Lilah personally, promising that he'll kill her if she ever comes at him through Cordelia again. Angel and Cordelia talk with each other of their concern that they have freed someone who is evil, and Angel says that Cordy's visions are more important than this person, whoever he is and he will be dealt with when the time comes.

In the Yoro Mountains of Honduras, Darla visits a shaman and asks for help in finding out why and how she is pregnant, and in killing the fetus. The shaman tries but fails to help her, so she decides that now she must return to L.A. in order to visit "daddy".