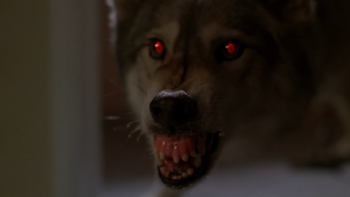 "That's an Asian dog. Supposed to have been extinct for the last 150 years."
Written by Jeffrey Bell
Directed by Peter Markle
Karin: Classic dominant-alpha territorial behaviour.
Mulder: No. This animal seems to have ranged many miles to make its attacks. In each case it seems to have outsmarted or at least tricked its victims.
Advertisement:

Mulder and Scully, with the help of an introverted canine expert (Melinda Culea) and an enigmatic cryptozoologist (Andrew Robinson), investigate the Wanshang Dhole, a shapeshifting killer canine.

"Maybe what she did was the highest form of compliment."