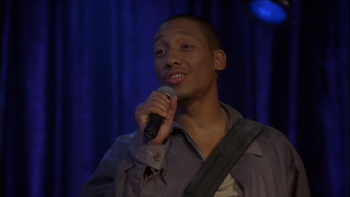 Angel tries to apologize to Merl, the demon whom he has long used as an informant, and whom he has frequently abused. Merl doesn't feel his apology is sincere. Angel goads him into taking a free punch, but because they are at Caritas, a spell, which prevents any violence by demons, instead causing Merl to be thrown backwards, which just makes him feel that he is being ridiculed. He goes home and, as he settles among his pitiful possessions, he is violently attacked and killed. The next morning, Angel and Wesley investigate the killing and call Gunn to join them—they interrupt him from a nightmare in which he is reliving his killing of his vampiric little sister. Gunn is annoyed at the call, not understanding why they should care about the murder of a demon, even if he was a harmless one.

Gunn heads on over to visit his old crew. As well as reuniting with Rondell he also meets Gio, a new addition to the gang criticizes Gunn for working with a vampire, instead of killing him. Gunn leaves the confrontation angry, feeling his old friends think he's a traitor or vampire-lover. His friends take him aside and, while defending him from the charges of being a traitor, still feel like he hasn't been around and seems to have forgotten his friends from his old neighborhood.

Angel and Cordelia talk about Fred, who is still not coming out of her shell despite three months back in Los Angeles. Angel asks Cordelia to talk with Fred to help her. Cordelia induces Fred to come out with her that night to sing karaoke at Caritas.

As Angel Investigations investigates Merl's killing, they compile a Merl Enemy list, with demons who became Merl's enemies because he snitched for Angel filling out most of the list (Angel is annoyed to find himself at the top of the list, even as Cordelia explains he's only top because it's alphabetical). But as Angel and Wesley visit demons, they find that some others have been killed, seemingly for no reason. In the sewer, a timid, awkward Yarbnie Demon drinks a Big Gulp, and is hunted down, attacked and killed by Gunn's old friends. As Wesley investigates Gunn again wonders why they are bothering to investigate murders of demons. Wesley says that the innocent demons are being killed alongside the guilty. Gunn finds an arrow at the crime scene and recognizes it as belonging to his old crew. He pockets the evidence and then confronts Rondell—he thinks Gio has gone rogue and is doing the killing. Rondell explains that the whole crew was there—they go after anything non-human. Gunn is disturbed by their complete disregard for the lives of non-humans. He goes to see Wesley, and runs into Angel, who believes that the kills demonstrate that the perpetrators are having fun.

Meanwhile, at Caritas, Fred goes onstage to sing. Gunn stops by looking for Wesley, but before he finds him, Caritas is stormed by Rondell, Gio, and friends, who indiscriminately open fire upon all of the demons at the bar, the massacre made all the more horrifying given the harmless surroundings and the complete inability of the demons to do anything violent while there. Wesley rescues Fred, who is frozen onstage. Rondell wants to leave, but Gio confronts Gunn, condemning him for drinking with his demon friends, and accusing him of having a vampire for a best-friend. They go to kill Lorne, but Gunn shields him, and confronts Rondell for the wrongness of killing demons at random. Rondell and Gio hold Wesley, Gunn, and Fred hostage but allow Cordelia to leave so she can bring Angel. He rushes over to the club, but asks Cordelia to visit the Transuding Furies, the ones who placed the anti-demon violence spell at the club in order to get it lifted, so he can fight back.

Gio passes the time by singing a song, which activates Lorne's powers, and Lorne realizes that Gio is on the run from something that he did to a woman in Miami, a woman who trusted him. Tensions continue to mount as Gunn is taunted by both Gio and a demon until Angel finally arrives. Gio demands that Gunn kill Angel, but he refuses. He says he'll never be friends with Angel but he won't kill him. Gio then says that anyone who kills Angel can get out alive. Fred picks up the crossbow to kill Angel because she doesn't want to die, but then turns it around on Gio instead. But she is quickly disarmed. The spell is then lifted and a free-for-all fight ensues. A demon kills Gio, and is in turn killed. The team all get out alive, but damage has been done to their relationships. After severing all his ties with his former gang, Wesley tells Gunn that he understands that he felt divided loyalties, but gives him a stark warning that if he ever withholds information again, he'll be fired. Gunn then speaks with Angel about what he said in the club and apologises, although he meant every word. Angel understands, and when Gunn suggests that this not killing him when he could proves he can be trusted, Angel states that Gunn will prove he can be trusted if he can kill him when he has to.