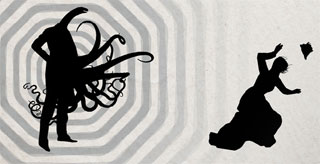 "Some krogan believe that testicle transplants can increase their virility, counteract the effects of the genophage. It doesn't work, but that doesn't stop them from buying. They'll pay up to ten thousand credits each, that's forty thousand for a full set. [beat] ...Somebody's making a killing out there..."
— Garrus Vakarian, Mass Effect
Advertisement:

Humanoid fantasy races, Rubber-Forehead Aliens, and the like will have genitalia close enough to the human model that they can get down and dirty with humans or the equivalent. (Most of the time, anyway.) However, there will usually be just enough variance to make the experience...different for the human participant.

If this isn't made explicit in the canon, expect it to be explored in art or Fan Fic.

For other kinds of "exotic equipment" that have nothing to do with sex organs or even biological reproduction, see Impossibly Cool Weapon or Impossibly Cool Clothes. Not to be confused with Phallic Weapon, though in some cases actual genitals can be used as weapons.

Although the film used Male-to-Female Universal Adaptor instead